The fishing when possible since the last report has been excellent on the lake. Many anglers are catching fine seatrout with many having landed fish up to 2.5lbs and one fish of nearly 4lbs in recent weeks.
The grilse continue to come into the lake encouraged by fresh water from all  the rain we have gotten over the last few weeks which was well and truly needed for both anglers and farmers alike!
Thursday 18th.
Mervyn Corway 2
John Cosgrove 1
Gallagher  had fish 1.
3 of those fish were released.
FRIDAY19th
The following had fish
Ml.Cunningham.
P. Maguire 1
John Cosgrove 1
All those fish were released.
There was no fishing from Saturday 20th. Due to gales.
Friday 28th John Cosgrove  7lb.fish.
No fishing again until Tuesday 30th. Eamon Power and Sean Keenan had one each.
Wednesday .D.Mcloughlin; S.Keenan, L.Gilsenan, Cox all had fish most were released.
Thursday 2nd. Robert McDonnell, Cosgrove, E.Corry, J.Furey, J.Burns, J.Murray and E Giblin and E.McGuinness all had fish. Most of those were released.
Seatrout fishing is also very good with some excellent catches and trout up to 2’5lbs.
If you ever wanted to see what a good flood on the Owenmore river looks like have a
look at the photo below…a sight for sore eyes and as always with spate rivers it went down as quick as it went up – almost!
There were plenty more fish caught in recent weeks but unfortunately a lot of anglers do not supply us
with the photos they promise us so a lot of fish go unseen.
More to follow soon…. Local Angler and Ghillie -John Cosgrove continues to build his fine angling reputation – its definately a good year for John – we want to know what secret fly he is using! 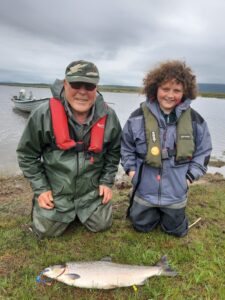 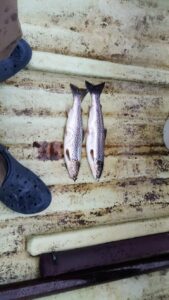